I had great work outs this week. My mileage is on the low end, but I am right where I should be per my marathon recovery program I am loosely following. I have not been keeping track of my times/pace. I am just running based on how I feel. it's nice not being obsessed with the numbers!

Here is how my week went.

Since I feel that it's only right to make sure I post about my final steps in preparation for the marathon, here is how the week went.

Chicago did not go as well as I had expected. I had these visions of me crossing the finish line in under 3:40, being able to call home and tell my dad about what I accomplished, meeting up with friends after the race for grub, drinks and to celebrate the goal I had reached; to qualify for Boston.

None of this happened. Let take that back, I did phone my dad to tell him how I finished but none of the other things took place.

Guess I should back up and start from the beginning.

Sunday morning I woke up at 4:30am, still sick. In fact, I felt worst. I washed my face, brushed my teeth, got dressed and headed downstairs to make my pre-race meal; wheat bagel with creamy peanut butter and a bottle of water. We were in the car and on our way by 5:15am. Traffic was not bad at all. My brother in-law, Tommy, quickly found a parking lot about 6 blocks from Grant Park. I grabbed what I needed while my brother in-law and Chris took the bikes off the bike rack. They had brought along bikes so they could ride from each mile marker through out the race to watch me. We headed up the street where I was able to go in to the corral area and they headed off to meet up with Tommy's old boss. He had 2 access passes along with volunteer hats, shirts and jackets. They were to work the start line but didn't know what they would be doing.

I made my way to the port-a-potty's and over to a tree to sit under near my start corral. I did some stretching, people watched and went over my race strategy in my head. I decided I better try using the bathroom on last time and waited in a LONG line. I went and got into my corral. As I was walking I heard "Steph" and looked up to see Chris and Tommy. Tommy took a quick shot of me and Chris. 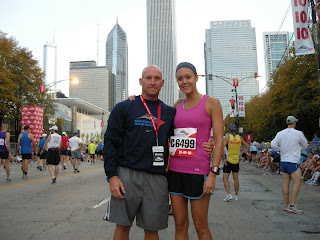 (Chris and I pre-race)

They wished me luck and were off to work the start line. They had to stand in front and make sure none of the elite runners crossed the line prior to the start. Chris was able to take a couple quick photos before having to move out of the way. 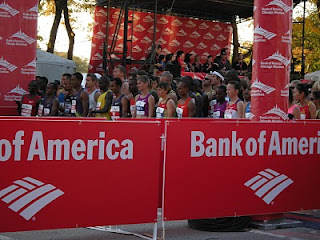 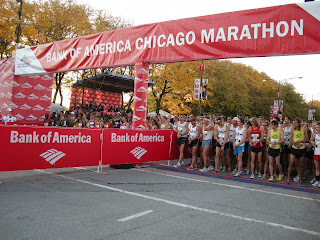 I hung by the 3:40 pace group with plans of staying with them for the entire marathon. That didn't last too long. I was trying so hard just to stay with them during the first 2 miles. Not because I couldn't keep up but because of all the runners that kept pushing me out of their way or running into me! It was so frustrating. So since I thought I was feeling good, I just took off on my own. I knew the race was going to be tough from the start. My throat hurt, my nose burned and my legs were heavy. But I was ahead of the 3:40 group so I figured I was good! I tried to take in the crowd support. Wow, that crowd support is like nothing I've ever seen at a race. I kept telling myself to look around, half fun, enjoy the scenery, anything to take my mind off my time and what I was there to do.

Well, by mile 11, I knew it wasn't going to happen. The heat and sunshine were really starting to get to me. I had my fuel belt with hammer heed & hammer gel, but stopped at every water stop. I felt dehydrated and couldn't get enough water. I saw Chris & Tommy at mile 14 and changed one of my empty heed bottles for a full one. 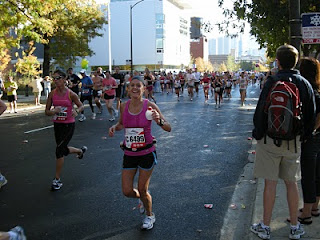 Chris asked how I was feeling and as much I would have loved to say "great", I told him "awful" and kept on running. Between 14 and 16, I lost it. I am not sure if I was mentally letting the heat get to me or what happened. Chris and Tommy we are the 16 mile marker. And thank god they were. 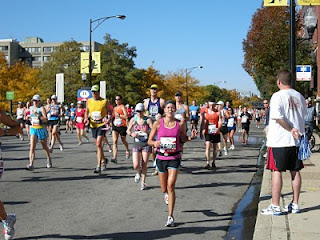 
I had to pee so bad and was some what delirious. I went off course straight into an empty parking lot. Chris grabbed me, got me back on course and ran with me for about a block as I whined about having to pee really bad. He told me to just go, that I could do it. So now, not only am I hot, but I now stink like urine because when he said go, I went. in my pants. At this point I am not understanding what is going on. I mentally was breaking down far sooner then I did last year when I ran Detroit. And it seemed to last much longer. I continued to count down the miles. I made sure to keep hydrating and ran through every mister/hose on the course. I saw so many runners getting medical attention and was lucky that I was not one of them. I was able to keep running so I used that as a motivator.

The last 10 or so miles were a blur. People around me yelling "you're almost there", "only 6 more miles to go", etc... I had been passed by the 3:40 group. I can't tell you where. It happened somewhere in those last 10 miles since I was still ahead of them at mile 16. even after the 'parking lot' incident.

I gave it that final push and seeing the signs "800m to go" "400m to go" "200m to go" were such an awesome site. I was so ready to be done with this marathon! I tried to push hard up the bridge, made the left hand turn and was heading for the finish line. I heard my name, looked up and there in the bleachers were Chris and Tommy. I tried to smile but could only shake my head and kept on going. 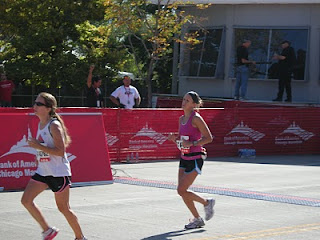 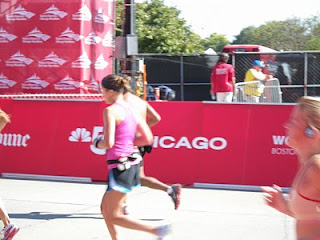 I crossed the finish line at 3:44:00. 4 minutes off my goal. I was happy though. Not only did I finish with a PR, but I ran this as hard as I could. I was sick from the start, so hoping for a BQ was a little ambitious. I couldn't help think of the 'what ifs'. what if it was cooler? what if I had stayed with the pace group? What if I wasn't sick that day? what if I had chosen to take medicine that morning versus not taking anything at all? Those what ifs do not bother me. If anything, it has made me even more excited to tackle my next marathon.

Three words can describe the expo; A Runner's Dream! 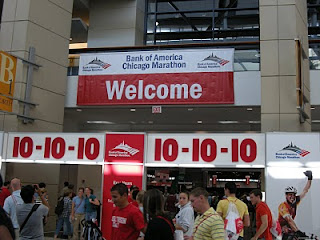 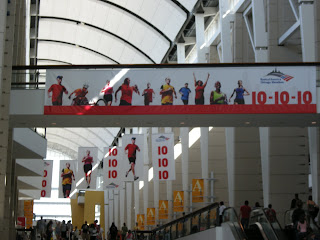 This expo was so much better then any of the other ones I have been too! I left there with tons of samples, 2 Nike tops and a full tummy from the Clif/Luna display. 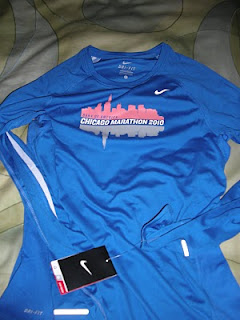 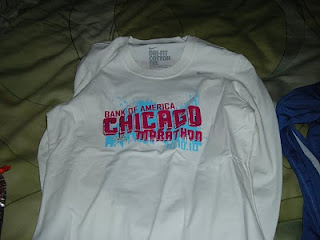 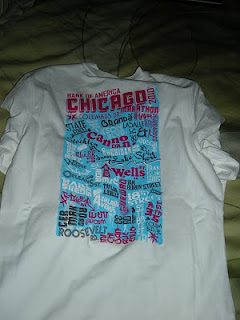 We ended up going Saturday late morning and made our way to the packet pick up and back to the shirt/participant bag pick up. Then it was off to scope out all the vendors. I spent a lot of time at the Nike display trying to decide what to purchase. I think I tried on every style top they had to offer! I finally settled on a long sleeve dry fit white t-shirt and a base layer blue top. There were so many people along the Nike mural. Luckily, it only too me about 2 minutes to locate my name. 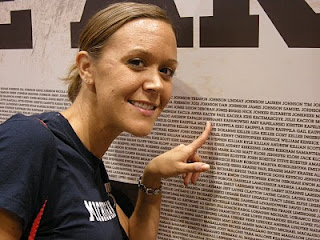 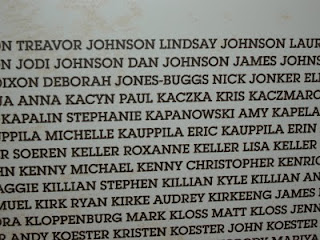 We made our way through the expo when I spotted the line for the commemorative photos. I waited in line for about 15 minutes to have mine taken and then made a pit stop at the 10-10-10 block numbers for a quick snap shot too. 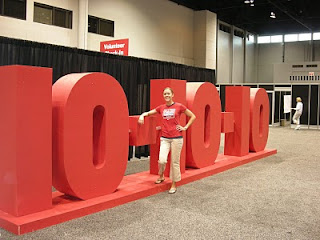 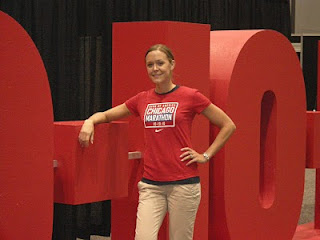 After 4 hours of walking around the expo in flip flops, my legs were sore so it was time to go! It was time to head home and get some rest for the big day...
Posted by Stephanie at 10:05 AM 2 comments:

Packed and ready to go! 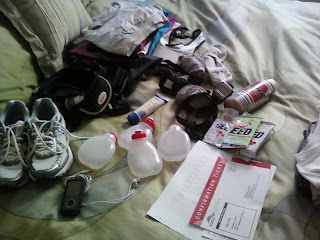 I've narrowed down my outfit for Sunday but now I am stumped on my fuel belt. I've trained with it on all of my long runs and even wore it when I ran the Detroit Marathon last October. I originally planned to wear it for Chicago, but now I am started to question that decision.

I am not a fan of Gatorade, so I would carry Hammer HEED in my fuel belt bottles. I would also have a Hammer flask filled with gel. If I do not use my belt, I am stuck drinking gatorade and pinning gel packs to my shorts. But I also lose the additional weight around my waist.

I used my 4 bottle belt while training, but wore my 2 bottle belt when I ran Detroit. Maybe I should down size from the 4 bottle to the 2 bottle for chicago. It would lighten the load around my waist. 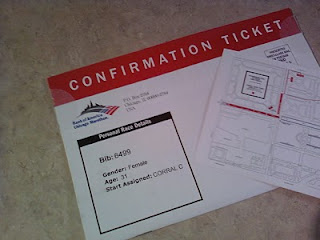 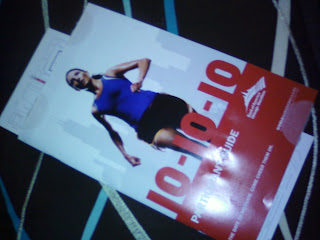