A few friends of mine are planning on running 6 half's in 6 months. We have 4 on our schedule but need to find 2 more; 1 in June and 1 in July. And being totally cheesy, we are calling ourselves the six pack crew. lol We plan on getting shirts made that name our 'crew' name on the front and the back will list each half marathon we are running.

I had no intentions of running a full next year, but that may change. I was speaking with a friend and a VERY experienced runner and he thinks I should run Detroit again with a BQ goal time. I was only 6.25 minutes off when I ran the full in October and he said with all the training, mileage I will be putting in and half's we are running, that I could run Detroit and qualify for Boston. So I might give it a shot. we shall see.

We also put together a team for Dances with Dirt. It will consist of 2 women, 2 VERY fast men and my dad, who is also fast & has experience with DWD.

Anyway, here is what is on my schedule for 2010. Its obviously not complete.

I need to find a race for March. I plan on spending December & January doing lots of strength training, cross training and will run a couple times a week.
Posted by Stephanie at 3:40 PM 2 comments:

Not a bad day for a run. I just hope next year they can organize the start different. It was VERY slow and coming to a complete stop more than once was annoying. I know a "family" race isn't a place to try and get a PR, but that is just how I am. Always trying to beat my previous times. Well, instead of a PR, I matched my previous 10K PR to the second.
Posted by Stephanie at 6:28 PM No comments:

I PRed! I beat my previous finish time by 9 seconds for a new PR of 23:02! I really think I could have come in under 23 minutes had I not realized I ran the first mile in 6:53. That really messed with my head. I started to convince myself there is no way I could keep that pace and slowed down. I was able to pick it up at mile 2 and again when I hit mile 3. And of course, I had to pass the young guy running next to me, so I sprinted past him to the finish line.

Hoping for a speedy 5K

Tomorrow morning I am running my first 5K race in over a year. The last time I ran a 5K was in September of 2008. I was the female overall winner with a finish time of 23:11. it was a smaller race, but that was my best 5K finish time! Since then I have stuck with longer distances; 10K, half marathons and a full marathon. My goal is to beat my previous time. I am not feeling to confident. If I can run at a 7:27 pace, I will beat it. I have not done much speed work, just a couple sessions this week. I also have NEVER ran a distance and not beaten my previous best time. If I do not finish with the same time or faster, I know I will be so disappointed in myself. I really need to convince myself that I got this! I can beat 23:11.

Wish me luck.
Posted by Stephanie at 8:48 AM No comments:

A successful treadmill work out!

Let me give you some background info. When I first started running in 2007, I started off doing short runs on the treadmill at the gym. I was actually scared to run outside. I stuck to treadmill running for months. Then I decided to sign up for my first 5K and knew I had to hit the pavement.

Once I started running outside, I realized what I was missing out on. Ever since then I refused to step foot on the treadmill. I would run outside or on the indoor track. The treadmill was, to me, the devil.

That all changed last night. I decided to switch up my work outs and do speed work on the treadmill. Surprisingly, I really enjoyed it! I think the constant adjusting of the incline and speed made the work out go by quickly. I was originally going to do 3 miles, but ended up doing 6.25. At one point, I had a 7:20 pace going.

It was an awesome work out and will definitely be doing this again!!
Posted by Stephanie at 8:48 AM 1 comment:

My running shoes miss me!

My running shoes miss me. I have not been running all that much since the marathon. Last weekend I ran 4.88 miles on Saturday and didn't run again until last night; and I only ran 4 miles. I plan on going for my first long-ish run tomorrow morning; 9 miles.

I've been working out and focusing on strength training, but really need to put forth the effort to get more running in. I do not want to lose the endurance and distance that I have gained. So starting next week, I will make sure I run a minimum 3-4 times a week!

forgotten sports bra and chased by a dog

I headed out to our property over the weekend since the hubby was out there hunting. Saturday I mapped out a rural 4.5 mile route. I pulled out my gear Saturday morning and low and behold, I forgot my sports bra. Doh! How did I manage to forget such an important article of clothing? No worries, I'll just run in my regular bra.

I headed out and instantly felt pains in my knees. I should have NEVER listened to the hubby when he told me to bring my old shoes since it's mostly dirt roads! My old shoes have no support left in them and shoes are made to get dirty right? So why not run in my newer pair?

So now, here I am with a regular bra on and bad shoes. I run past a farm and had a horse snorting at me. He didn't like me running down his road! Then I pass another house and hear a dog barking. I kept thinking "please don't chase me". It didn't. It did run out in front of his house and bark at me though. Sweet! No worries. I turn on to the next road which is corn fields to the left and right. As near the end of the road, I see two dogs out in a yard. Then I notice the owner in the driveway, so any nervousness passed almost instantly. That is, until I run past, hear the owner yelling and look behind me to see a black dog hot on my heels! It finally stopped, turned around and ran home. What I don't get is the fact the dogs owner just stood up near her home, yelling for the dog. Ok, fine, maybe she knew the dog wouldn't do anything to me, but I didn't know that! I was a bit apprehensive for the next 2.5 miles. I still had 2 more country roads to run on. Nothing happened. Other than seeing a speedway in the middle of a corn field for sale and having a farmer on his tractor wave at me.

The route was a nice one, but next time I will take my mace just in case I get chased by a dog again! And I will also make sure to pack a sports bra!
Posted by Stephanie at 10:35 AM 2 comments: 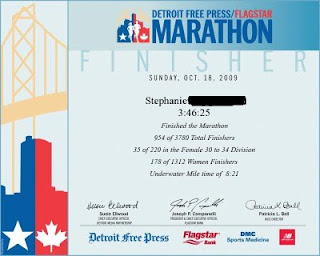