Sunday, May 5th, marked my 7th marathon (9th including my 2 ultras); The Pittsburgh Marathon.  I knew going into this race that the course would be difficult.  Lots of hills.  I was still coming off a runner high from how well I ran Boston and had hoped that feeling would catipult me into a fast finish in Pittsburgh.  Originally my goal was to run a nice and easy pace, finishing around 3:45.  But as the day drew near, I had this crazy idea of trying to PR.  Could I do it on this hilly course?  I thought, sure, why not?  I just ran a 3:29 in Boston, felt great and could have pushed the pace faster then I did. 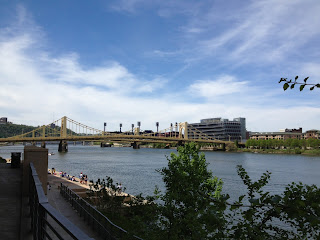 Bridges in Pittsburgh.  The half marathon and marathon course ran across these.﻿

Anyway, we hit the expo the day before the marathon.  I ate and drank my way through the expo.  I sipped on various protein drinks, tried every protein/meal replacement bar, etc...  Was that a good idea?  Probably not but I had no self-control.  We left there loaded down with a couple bags of samples and freebees.  There were so many tributes to Boston.  Everywhere I looked someone was wearing something in support of Boston.  GNC had a wall for runners to sign, which I made of signing on our way out.  I also made sure to find my name on the Dick's Sporting Goods wall.  It listed all the registered runners.  Chicago marathon does this as well.  it's fun trying to locate your name and then relocating it when trying to take a picture! LOL! 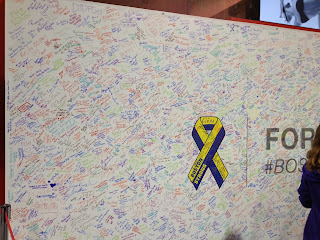 Part of the Boson wall 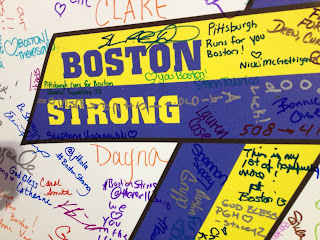 I signed the ribbon, just under the word "strong"
﻿ 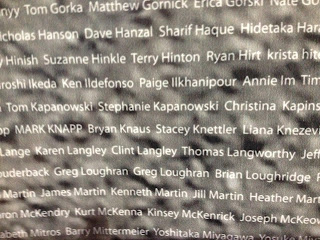 After we left the expo, we headed over to Primanti Bros.  My mother in-law HAD to eat there.  She has seen it on Food Network numerous times and had to eat at this popular Pittsburgh restaurant. 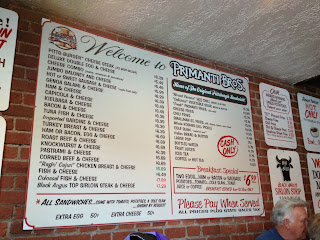 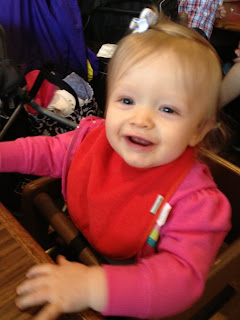 Anna all smiles at Primanti Bros.
The table split an order of the Smallman St Fries; french fries topped w/ bacon, chili, cheese and sour cream.  I ordered the turkey w/ everything except onion.  I wasn't really thinking about what I should and should not be eating the day before a marathon.  I should have.  More on that later.
After lunch we headed to my brother in-law, Tommy's office.  He works for Adidas and then to his house to relax for the remainder of the night.  We fueled with a pasta dinner and ice cream topped w/ butterscotch peanut butter.  :-) I finally called it a night around 9:30pm.
I was up off and on through out the night and finally out of bed at 4:45am.  We (myself, Chris - running the half, Kate - my sister in-law - running the half and Tommy - my brother in-law - injured and spectating) got ready and headed out the door by 5:30am.  We made it to Pittsburgh, parked, used the port-o-potty and was in corral B by 6:30am. 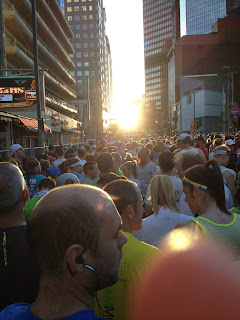 ﻿
Start line, in corral B
The national anthem was sung, we had a moment of silence for Boston and were off promptly at 7am.  The start was SO congested!!  I was pushing hard and weaving in and out of people, passing the 3:40 and 3:35 pace group.  I caught the 3:30 pace group and figured I would hang with them.  About 2-3 miles in my stomach was really bothering me.  I kept going back and forth on whether or not I should stop and use the restroom. I've never had to stop during a race, let alone to use the restroom, so coming to that decision was really tough.  Just past the 6 mile marker, I saw 4 potties in a row, with one being unoccupied.  I ran straight inside, thought I locked the door, did my deed, was just getting ready to pull up my shorts when the door flung open.  Oops.  Guess I didn't lock it.  Luckily, I wasn't in the port-o-potty too long and easily caught back up to the 3:30 pace group where I stayed until about mile 12.  Then this happened....

As we ran up hill for what seemed like an eternity, I watched the 3:30 group pull further and further away.  I was ok with that.  I knew trying to PR was a lofty goal, even breaking 3:30 after running Boston 3 weeks prior was ballsy.  I reevaluated my goal and decided I'd be ok with anything up to 3:45, but nothing slower.  We were only have way through and I was already starting to play the head games.  At mile 16 I finally did something I NEVER do in a race. I put in my ear buds.  I needed something to help me get my head back into this race.  I listened to music from mile 16-24 and just tried to enjoy the run.  I took my ear buds out at mile 24 since the crowd was getting thicker as we were back in the city and getting very close to the finish.  At mile 25 the 3:35 pacer came running up next to me.  I ran next to him for a very short time before pushing past him.  I tried to run as hard as I could straight into the finish.  Once I crossed, I was so happy for it to be over.  I was beat.  I got my medal (which is HUGE), some water, a banana, space blanket and called my brother in-law.  By the time I found Chris, Kate & Tommy I was in tears.  My legs were cramping so bad.  We went into the Dick's Sporting Goods tent so that I could get a massage.  I ended up being stretched out by a chiropractor prior to receiving my massage. I felt so much better afterwards and was so thankful that we actually had to walk a ways to the car.  I've experienced this cramping/pain before.  it was after the Bayshore marathon in 2011.  My current PR marathon.

A friend of mine asked if I would run this event again.  As of now, I am not so sure.  It was very tough both mentally and physically.  Although, I must enjoy the abuse because I have another ridiculously hilly marathon on June 9th in Ann Arbor. 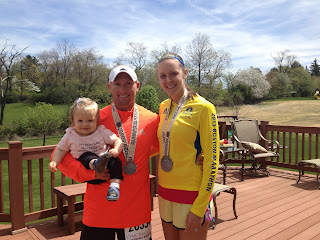 Chris, Anna and I after the marathon/back at my brother & sister in-law's.  Anna's shirt says "my mom ran 26.2 miles, what did yours do?"

More to follow once we get home from Pittsburgh.