How did I do this?  I, along with 5 of my running friends, challenged ourselves to run everyday for the entire month of July.  We would rise in wee hours of the morning (sometimes 4:30am) to run various distances, do hill repeats, etc... Together, we were able to motivate each other and stay dedicated to this challenge.  Together we were able to hold each accountable for our daily run.  Together we managed to run a total of 1,412.84 miles for the month.

I love my 5am run group.  It's such a great group of talented runners.  I am honored to call each and every one of them my friend! 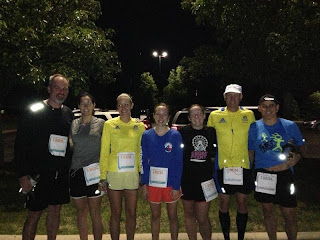 What I've been up to; running, future races, new shoes.

After the Ann Arbor Marathon, I decided to take the entire month of July off from racing.  It has been marathon training and marathon racing January - June and I needed a break.

That break didn't last too long...

I created a self challenge and the recruited a few running friends to join in the "fun".  Run everyday for the month of July.  So much for "taking it easy".  It's been fun, so far and for their efforts, I will give the person with the highest mileage for the month a little runners good bag.

I have also finalized my 2013 race calendar.  I still need to register for a few of these, but once I know I plan on running a specific race, I never back out.

I need a second job to start funding my race addiction!

Thanks to my loving husband, I recently received my 2nd pair of Adidas Energy Boost.  I love these shoes.  My last pair has over 650 miles on them (and 3 marathons!) and they just now began giving my aches and pains.  Adidas has put out some fun colors for the new models.  I love how bright these are! 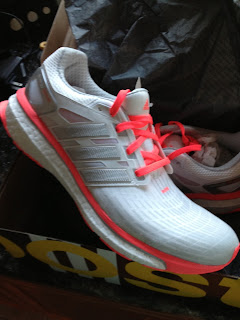 I am also considering the Adidas Bostons as a shoe to add to my rotation.  They are a neutral shoe and light weight.  I would use them for hill work and easy paced runs, while running the Boosts on speed days, faster long runs and races.  For years I have spent all my time running in a support shoe.  I needed it when I started.  I over-pronate.  The Energy Boost are a cross between neutral w/ some support for those who over-pronate.  When I run in my other shoes, they feel bulky and uncomfortable.  Should I be going neutral?  Who knows.  Only time will tell once I start phasing out my others while adding the Bostons.
Posted by Stephanie at 10:46 AM No comments: