Sunday, September 30th, was the 5th running of the Brooksie Way half marathon & 5K.  I had signed myself and Chris up a few months back.  It would have been his first "official" half marathon.  Yes, he did run Rock CF half with me, but I was 30 weeks pregnant and there wasn't much "racing" going on.

I told him going into this race that I refused to let him beat me.  he beat me in August at an extremely hilly 10 mile race and I refuse to let him beat me again.  I am competitive with my husband when it comes to running.  He runs for cardio only and focuses more on strength training.  So when he beat me in August, I was going to make sure it was the first and last time he did so.  :-)

My goal for this half was to finish in 1:40 or better.  I wasn't 100% positive I would actually be able to do it.  The course is not flat by any means and I had just ran an extreme trail 50K the week prior.  Who knows how my legs were going to feel.  They felt good when we started so I figured I would push the pace for as long and as hard as I could.  With all the hills in the last 5-ish miles, I was not sure I would reach my goal. I told myself "running sub-8 minute miles in my first half marathon since giving birth on June 7th was still a great accomplishment" and would be happy with that.  I ended up finishing the half marathon in 1:40:57 with my last mile being my fastest at a 7:07 pace!!  I couldn't believe how great I felt and began questioning if maybe I could have even broke 1:40!  It's not a PR (about 3 minutes off from my PR) but I still consider it a very respectable time.  Chris ended up finishing just behind me in 1:41:53.  Less than a minute, but I still crossed the finish line before him!!  :-)

Before I met up with him at the finish line, I was able to say a quick hello to Jeff over at Detroit Runner.    We met back in 2011 at the 1st Rock CF half.  If you do not read his blog, you must start NOW!  Not only is this guy a talented runner, but you must read on how he got started in the first place.  Congrats on a speedy finish Jeff!  See you in GR!

I have yet to purchase any photos from the race and not so sure I will.  I look like Shrek in all of them.  I swear, I never take a good race photo!

Another ultra under my belt!  The weather was cold and wet, just the way Randy Step prefers it.

The DWD events are such a challenge.  They are not just any trail race.  The course takes you off into the woods, through mud, through various water crossing, up a river, lots of up & down, on to technical trails full or rocks/roots/hills and you have a blast while doing it.

I ran this event last year and had so much fun that I couldn't wait to do it again this year.  I knew it may not happen since I had just given birth in June but signed up anyway hoping I could tough it out.  and tough it out I did.

We started with a group of 8 and finished with a group of 6 (the other 2 finished about 40 minutes after we did).  Having such a fun group to run with not only helped the miles fly by, but it helped me in the end when the last few miles really start to break me down mentally.  We crossed the finish line together in 6 hours 21 minutes and 40 seconds in the pouring cold rain.  5 minutes slow then last years time but that didn't matter.  5 out of 6 of us placed in our age groups!  I placed 2nd out of 8 in mine (30-35).  Our awards were folding camp chairs.  Pretty sweet award if you ask me.  I am disappointed in the shirts this year.  Last years shirt fits so nicely.  This years shirt fits awful and the material seems off.

Here is a photo of us on the easiest, yet my least favorite part of the race.  it's the gravel "rail trail".  I'd much rather be on the trails in the woods! (I am in the middle w/ the black & orange.  my dad is in the red). 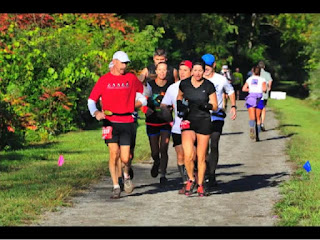